1. What is the method of reproduction of myxobacteria?

2. Does myxobacteria swim or glide and how do they do that?

3. Myxobacteria belongs to which phylum?

I found a great article in Science Daily, dated Feburary 13th, 2012 that discusses how scientists at North Carolina State University have discovered a compound that makes antibiotics more effective in eliminating antibiotic-resistant strains of bacteria that have recently emerged. Researchers discuss how it is more difficult to effectively eradicate gram-negative bacteria because they have the ability to effectively neutralize the antibiotic treatments that are currently available. Dr. Roberta Worthington and Dr. Christian Melander, NCSU researchers, claim that they have developed "a compound that, when used in conjunction with the antibiotic imipenem, increased the antibiotic's effectiveness against the antibiotic-resistant K. pneumoniae 16-fold" (ScienceDaily, 2012).

This article caught my attention because of my interest in medicine and biological research also because of the recent presentation we did on biofilm antibiotic resistance. The ability of scientists to keep up with the incredible evolution rate of bacterial genomes is fascinating. although bacteria are labeled as simple cells, their genomes are incredibly complex and variable. Genetic sequencing technology has integrally aided scientists in developing effective drug treatments against pathogenic bacteria however researchers are still trying to keep up with the rapid genetic changes that bacteria are able to achieve.

Antibiotic Production by Myxobacteria Plays a Role in Predation

In this research they tested that secondary metabolite antibiotics function as weapons in predation. To test that, Myxococcus xanthus Δta1 mutant, blocked in antibiotic TA (myxovirescin) production, was constructed. The TA- mutant was defective in producing a zone of inhibition against E.Coli. After testing based on their observation they concluded that myxobacterial antibiotic production can function as a predatory weapon. “To conserve material and increase effective concentrations, we speculate that myxobacteria can sense their environment to regulate the production and secretion of antibiotics for judicious use”.

Myxobacteria are soil dwelling gram-negative gliding bacteria, which form fruiting bodies containing resistant myxospores. Although they produce a wide range of antibiotics and lytic enzymes, their role in controlling plant pathogens has received little attention. Myxobacteria exhibited a strong inhibitory effect on both pathogenic and beneficial fungal growth in vitro although the degree of inhibition varied with the species tested. During the feeding of myxobacterium, individual cells organize in waves which traveled in a rippling motion. As the waves of the cells collide, they aggregate in mounds that grow in size forming fruiting bodies that can form into many more. Cells within these structures become myxospores.  They triggered by signaling at the cell-cell interaction when nutrients are available and myxospores germinate to eventually develop new swarms. To control these processes, myxobacteria have evolved a unique mechanism of extracellular and intracellular signals including diverse proteins and small metabolites. According to the study, the amount of different small molecules from myxobacteria targeting other soil bacteria and fungi, around 29% and 54% respectively, and their higher production rates during exponential growth seems to reinforce the idea of a broad use of secondary metabolites for hunting. Myxobacteria have been discovered as important bacteria for drag target delivery.

"A group of Chinese and Australian scientists have developed a handheld, battery-powered plasma-producing device that can rid skin of bacteria in an instant."  This device can we used in several situations where treatment is needed. In the experiment, the plasma flashlight effectively inactivated a thick biofilm of one of the most antibiotic- and heat-resistant bacteria, This bacteria was, Enterococcus faecalis which is a bacterium which often infects the root canals during dental treatments.  Results from the experiment showed that the plasma did not only inactivate the top layer of cells but penetrated to the very bottom killing the bacteria.   The device is inexpensive and and can we easily made.   There is no damage done to the skin with this device, it is made with resistors that prevents it from becoming hot.  However the exact mechanism behind the anit-bacterial effect of plasma in unknown there are some thoughts and reasoning.

Myxobacteria are Chemoorganoheterotrophs, aerobic, soil, complex life cycles with cell differentiation, gliding motility, rod shape,may form fruiting body with myxospores. The life cycle involves intercellular communication. The fruiting myxobacteria exhibit the most complex behavioral patterns and life cycles of all known bacteria. The Chromosomes of some myxobacteria is very large almost twice the size of Escherichia Coli. They do not possess flagella but are able to glide through the use of strange fibrils on the inside of the cell. Myxobacteria first form large structures called fruiting bodies which may have between thousands and millions of organisms. Some of the cells in the fruiting body divide, and the daughter cells come together to form what are called cysts, small groups of cells which are released into the environment. When a cyst finds an environmentally-friendly location, the cells divide and grow.

Life Cycle of a Fruiting Myxobacterium 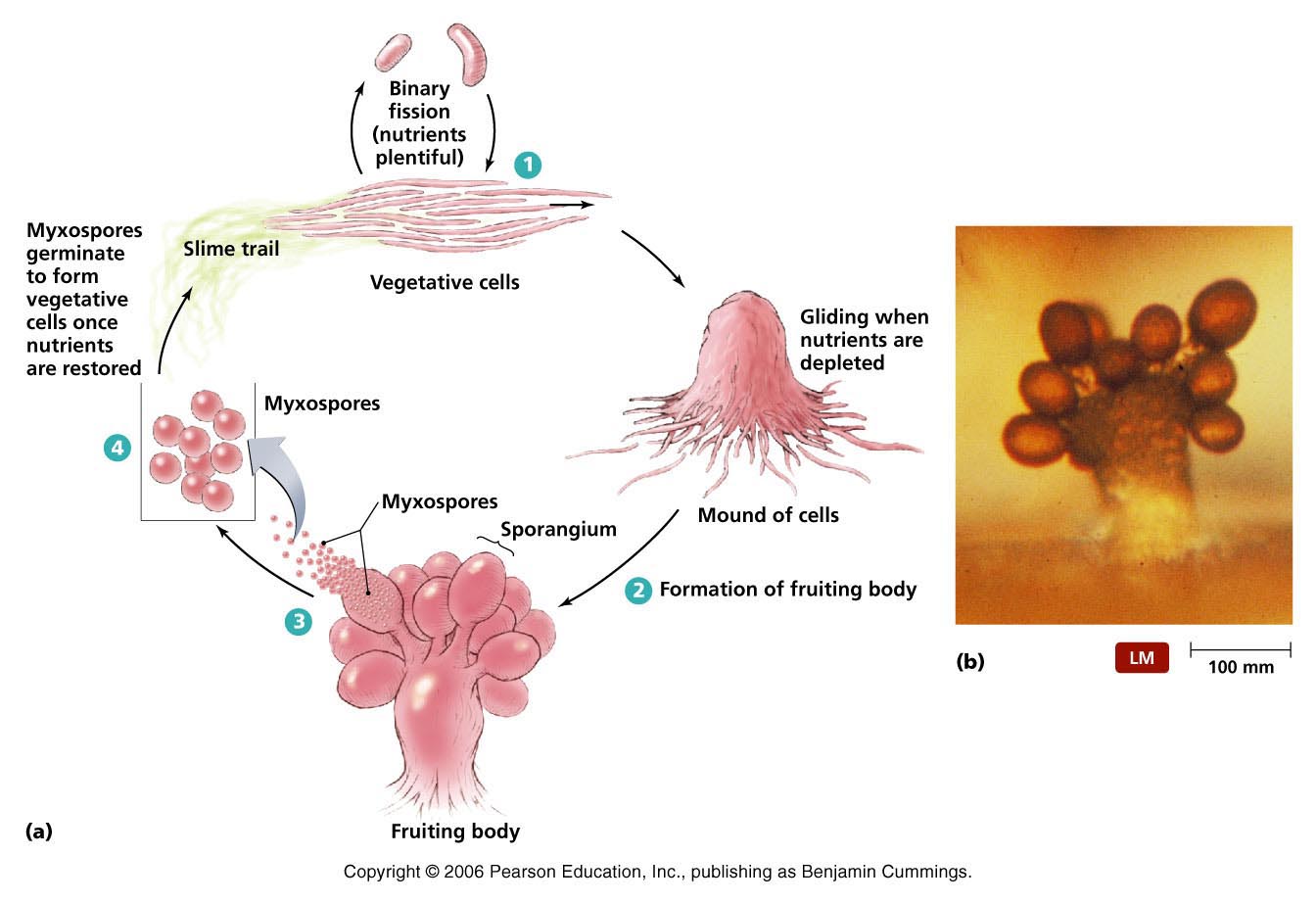 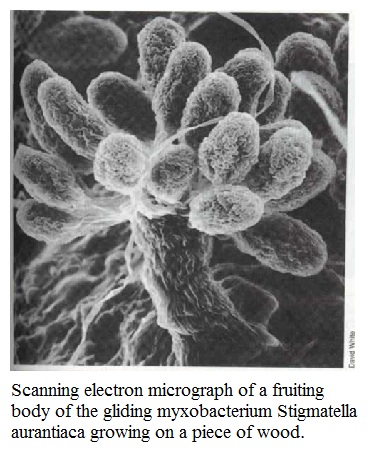 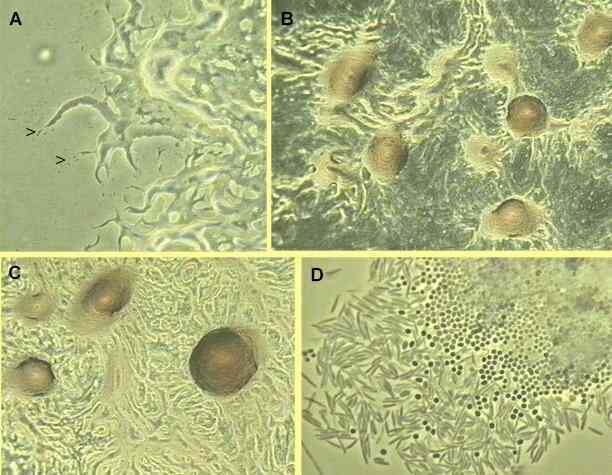 Pilus Showing the Gliding moving in the Myxobacteria

Teams of scientists working independently have for the first time identified several gene mutations that they agree sharply increase the chances that a child will develop autism. They have found further evidence that the risk increases with the age of the parents, particularly in fathers over age 35.

Mycococcus Xanthus life cycle is reflected in its 9.14 Megabase genome, the largest prokaryotic genome sequenced until the sequencing of Sorangium Cellulosum (12.3 Mb). M. Xanthus genome was sequnced by Monsanto Company and The Insisitute for Fenomic Research and is currently available in GenBank.

If anyone interesting in reading in depth about Myxobacteria there is a free online textbook (Myxobacteria: Multicellularity and Differentiation by David E. Whitworth).

St. Jude Children's Research Hospital scientists have discovered  a key enzyme structure in bacteria, a finding that lays the foundation for a new generation of antibiotics that are safer and less prone to drug resistance.

More than 400 meters below the Earth’s surface, in a virtually untouched 4-million-year-old cave, scientists have discovered antibiotic-resistant bacteria, whose existence could explain why the modern drugs we use to treat infections are failing.

Our overzealous use of antibiotics, largely in hospitals and on animal farms, has long been blamed for fostering the emergence of drug-resistant “superbugs.” But the bacteria samples from the isolated Lechuguilla cave system in New Mexico suggests that drug resistance is actually an ancient trait. It’s possible that bacteria’s drug-resistance genes evolved millions of years ago in organisms like those on Lechuguilla’s cave walls, and are showing up in superbugs now through bacteria’s natural process of gene swapping.

The pristine samples of bacteria taken from the cave revealed that the bugs are not infectious to humans but can fend off several types of antibiotics, including newer synthetic drugs.

Khushbu you did a great job on your postings. I learned a lot about your phylum. I took a look at your introduction and thought it was good also. However, I think you should provide more detail. You could perhaps discuss more in depth the phylogeny of the bacteria species' that have been discovered to belong to your phylum.

I learned alot. Your have a broad spectrum of information.

Khushbu, I like the way your page is organized. Your texts and images are separated well. I'd just recommend a brief discription of your images. I would also suggest maybe talking about a few specific species of your phylum.

Thank you all, your comments were very helpful. Myxobacteria is a species that belongs to phylum Proteobacteria, i could not find much more about my bacteria phylogeny so this is what i have

I have 7 article journal